People often get themselves confused with the terminology around fumigation.

This is the best definition of fumigation that we have come across:

"Fumigation is the measured process of application, exposure and dissipation of a toxic chemical in its gaseous state with the purpose of control of target pests in a product or enclosure."

The definition can be attributed to the great international fumigation trainer of the 1990s and 2000s, Mike Kelly who did his best to ensure raised fumigation standards around the globe

(L)Mike Kelly, Head of Acheta and (R) Martin Cobbald, MD of Dealey Environmental. Despite appearances, they are unrelated.

The first thing to note from this definition is that we are using gasses. Many people confuse many different pest control methods with fumigation. Smokes, thermal fogs, ULV fogs and even coarse sprays are called fumigation when really they are not.

The difference is the size of the particle that is involved in the treatment. Fumigants are gasses, which means that the particle size of the active ingredient is very much smaller than smokes, fogs and sprays.

I often tell my students that smokes, fogs and sprays get on insects, whereas fumigants get in insects. 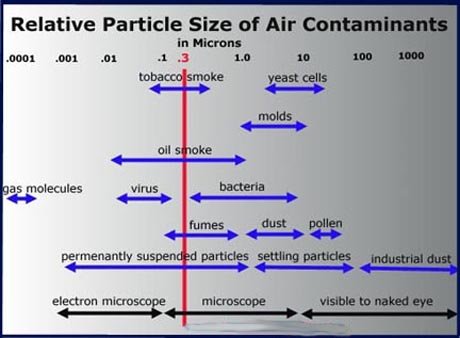 FYI the red line at 0.3microns is the size of a grain weevil's spiracle at normal lab conditions

This means that fumigants are very penetrative and can get inside a product or item that you are trying to rid of insects, rather than just being lethal to the insects on the surface.

Fumigant gases diffuse as separate molecules that penetrate into and through the material being fumigated. The molecular activity of gases increases with temperature. "Charles' Law" states that for each 1°C increase in temperature gases expand by 1/273.

Thus, the speed of activity of fumigants will increase at higher temperatures

There is also a vast difference in the mode of action of fumigants and insecticides.

It must also be mentioned that fumigants are much more toxic than insecticides, which means that much less active product needs to be used and that fumigation should only be attempted by specialist licensed companies like Dealey Environmental.

The Three Stages of Fumigation

A deep knowledge of insects is necessary because many different species of insect have differing susceptibilities to fumigant gases, especially in this day and age where genetic resistance of insects to some fumigants must be taken into account

The successful sealing of the object or product is crucial because all fumigants will need to be held at a consistent concentration over a period of time to have the desired insecticidal effect. Any variation of concentration over time either up or down may cause the fumigation to be unsuccessful.

These are the words of the late Jan van Someren Graver who was regarded as one of the world's leading fumigation experts.

The monitoring step is often the most important step of the fumigation. Sadly, it is also the one that is most commonly skipped by under-resourced fumigation companies.

All fumigations are subject to Haber's Rule which was first demonstrated by Fritz Haber in the early 1900s and can be summarised as follows:

In this equation C is tC {\displaystyhe concentration of the gas (measured as mass per volumetric unit), t t {\displaystyle is the amount of time necessary to be exposed to the gas to produce the desired toxic effect, and k is a constant.

This rule is used to calculate concentration time products (CTPs) which once calculated can prove whether a fumigation is working or not.

Reaching a lower fumigant CTP than is the threshold for the target pest species will lead to a failed fumigation.

This has become especially important in the UK where we restrict ourselves to a single application of fumigant gas for any one fumigation on the basis of food safety. And yet, most fumigation companies still leave out this step.

This is often the most dangerous stage of the fumigation where technicians, site personnel and members of the public may be exposed to fumigant gasses.

Ventilation can be done in two ways. Active ventilation uses fans to move the fumigant gas into safe areas or deactivation apparatus where it will no longer pose a threat to human health. Passive fumigation allows the fumigant gas to diffuse into the surrounding areas.

Gasses that are lighter than air, like hydrogen cyanide, may be ventilated according to a Gaussian Plume model. However, fumigants that are heavier than air, like phosphine, sulfuryl flouride and methyl bromide, must be ventilated carefully and constantly monitored until the diffusion of the gas into the surrounding area lets the fumigant gas reach concentrations that no longer pose a risk to human health or the environment.

All fumigation ventilation processes must be subject a generous exclusion zone which is constantly monitored.

How Long does a Fumigation Take?

The exposure time is determined by several factors including temperature, species of insect targeted and fumigant type.

Some common exposure times for fumigants are listed below:

This is the time that is elapsed between the start of the first stage and the end of the third stage of the fumigation.

Fumigation is a highly specialised area of pest control that must only be performed by trained, experienced and licensed professionals.

In the UK, to perform any stage of the fumigation listed above, a fumigator must hold the foundation training of Level 3 Award in Safe Use of Fumigants for the Management of Invertebrate Pests- Unit 1

Any one of the following Units which descibes the specialism that the fumigator has chosen and gained experience in:

At Dealey Environmental, we have technicians that hold certification in all of the above Units as well as additional units for aircraft and soil fumigation.

As leaders in the UK fumigation market, whatever your fumigation need, we will be able to get it done.